Welcome to Pao Pao Land! Many strange creatures reside in this colorful world. You’ll see a patchwork elephant, a sea creature peppered with portholes, and a unicorn trotting through a field where the flowers grow upside down. You can also get your picture taken with Mribo, a tall tentacled being with big ears and a fabric fish tail who dominates the landscape.

So far so cute, but the Brooklyn-based creators of Pao Pao Land, Aya Kakeda and Fumiha Tanaka, have added an extra visual layer for older visitors to their Redux show. Aya’s work is exemplified by her silkscreen storybooks, for kids who are too old or smart to put up with Barney’s bullshit. Fumiha produces slightly cartoonish characters that float inches above the ground, symbolizing the innocence and uncertainty of pubescence.

Collaborating as “Pao Pao” — phonetic Japanese for the trumpeting sound an elephant makes — the Savannah College of Art and Design alumni deftly merge their styles in an installation that will appeal to anyone sickened by adorable Disney confections, exploring themes of lust, loss, sorrow, and, er, menstruation.

This isn’t a kid’s dream playground where everything is bliss. Reality seeps through, adding unexpected elements to the weird world. A checkered creature vomits on a yellow submarine, a basking seal has petals on his privates, and Mribo smokes a cigarette. The boys and girls depicted in Pao Pao Land have the oversized heads and wide-eyed visages of manga characters, yet they’re also sad and lonely-looking.

This is primarily due to the hues that the artists have used. Working with stencils, fabric, pressed flowers, and latex wall paint from Lowe’s, Aya and Fumi keep the colors muted and insipid, as if the walls have been stained by Mribo’s cigarette fumes. The inhabitants of this drab fantasy look grubby or unshaven, adding to the seedy effect.

On the walls are photographs of more delicate sculptures, some of them betraying their origins with expiration dates stamped on their frilly bodies. Miwa, who fostered an interest in trash while living in New York, also provided music and food art for the opening night of the show. She describes these “taste experiences,” offered in small paper cups, as a food performance where the objects disappear, enabling the viewer to digest the art. It beats lugging large artworks around, too. 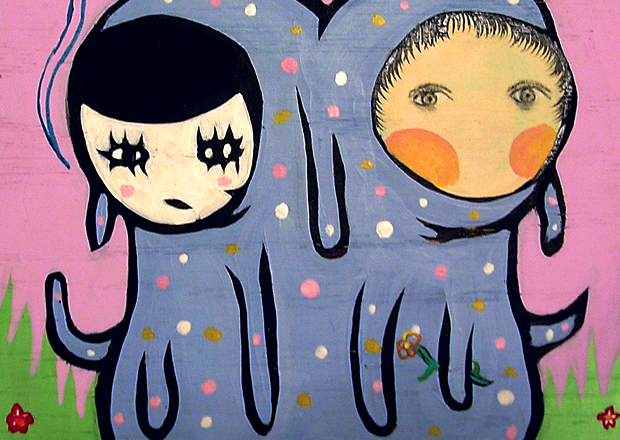 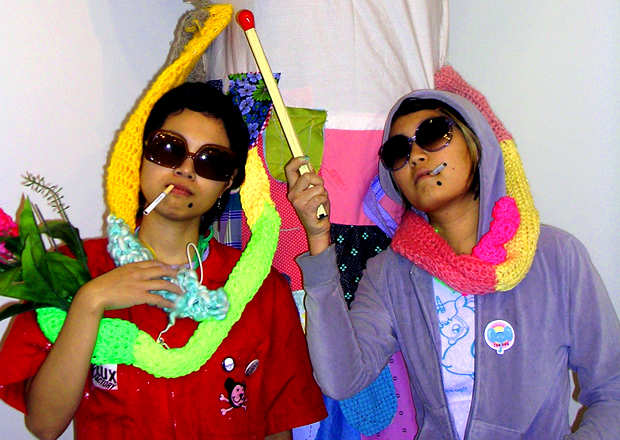