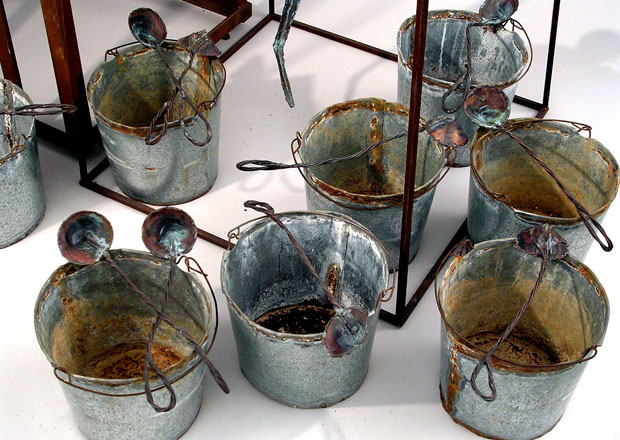 Candice Ivy is a multi­media artist from South Carolina interested in perception and the sensorial experience of the body. She received her BFA in Fine Arts from Coker College in 1999 and her MFA from the School of the Museum of Fine Arts/Tufts University, Boston, MA in 2006. Her multimedia works have been shown both nationally and internationally including Murmur in the Old City Jail in Charleston, SC as a part of the Piccolo Spoleto Festival, in the Sguardi Sonori Festival in Venice, Benevento, and Frascati, Italy, the Universidad Catolica in Santiago, Chile, as a part of Urban Occupations Urbaines in Montreal, Canada, and at the Taipei Artist’s Village, Taipei, Taiwan. Ivy’s video work has been shown in such venues as Boston University 808 Gallery, The Museum of Fine Arts, Boston, MA, the Rhode Island International Film Festival, Providence, RI, and The Berkeley Small Film Festival, Berkeley, CA.

In Fall 2014, she constructed Deluge, a 20 foot tall cascade of black glass sourced from broken car windshields at the Davis Museum, Wellesley, MA, And in 2015, Ivy produced a large community wide public art performance in front of the SC state capitol for the Sesquicentennial Anniversary of the Civil War in Columbia, SC. She is currently a recipient of the of the Saint Gaudens Memorial Fellowship and is producing work for a site­specific installation located at the Saint Gauden’s historic site in Cornish, NH.

Ivy currently teaches at Boston College and the Massachusetts College of Art and Design. She is also currently a Visiting Lecturer at Wellesley College, and Director of the College’s exhibition space, the Jewett Art Gallery.

In 1992 he was a Visiting Artist at the Victorian College of the Arts in Melbourne, Australia.  He has had residencies at the Community Council for the Arts in Kinston, North Carolina, the Association for Visual Artists in Chattanooga, Tennessee, the New York Mills Arts Retreat in New York Mills, Minnesota, and most recently at 121 View Street, La Trobe University’s Visual Arts Centre in Bendigo, Australia.  Grants supporting these residencies have come from the Jerome Foundation (1994), Mississippi Arts Commission (1994), the Arts Council of Winston-Salem Forsyth County (2003), and the Surdna Foundation in New York (2008).  Through the support of a Thomas S. Kenan Institute for the Arts’ 2009 BREATHE project award, Greg traveled with fellow UNCSA faculty member from the School of Drama, Kelley Maxner, to Houston, Texas and New Bern, Alabama to study Project Row Houses and the Rural Studio.  He has also received a Mellon Grant to study at the Penland School of Crafts in the summer of 2011.

His work has been exhibited in over 350 solo, invitational and group exhibitions, in galleries and museums.