George Read (b. 1950 ) arrived at Harvard a pre-med freshman in 1969. In his second semester, a humanities requirement sent him over to the Fogg Museum. There, he encountered famed Dutch paintings scholar Seymour Slive, one of the university’s most celebrated lecturers and, three years later, he graduated with a degree in the History of Art.

Harvard’s History of Art curriculum was strictly old-school then; illustrated lectures in the morning followed by reading and critical analysis of paintings and sculpture. There was studio work in the afternoons for those who wanted it; painting, printmaking, and analysis of color and form with working masters in those fields, including Eduardo Chillida, Afro Basadella, and Robert Neuman. There was also a summer serving as the influential and historically important art critic Harold Rosenberg’s assistant in the Hamptons. Read describes the summer as “a fearsome blur; two months of underwater demolition training in the fine arts. Mr. Rosenberg thought I needed serious artistic toughening up. He took the job very seriously. Relief came on days when he’d lend me out to his friends in the Springs. The artists Adolph Gottleib and Willem de Kooning among them. I’d go to their places and do chores. They were very kind. I thought I was in heaven.”

Later, in France, in the fall of 1977, he had his first show with a young Japanese sculptor, Tetsuo Harada. There, Read’s paintings and assemblages attracted the attention of well-known French critic Michel Tapie, who invited him to join a group of young artists working at the new Centre Pompidou. The plan was interrupted. Before he could move into the new space, he was offered a position at Sotheby’s, New York. He took the job and moved to the United States.

What followed was an immediate and complete immersion in the nucleus of the international art world. His next evolution included the titles of specialist, auctioneer, lecturer, writer, and consultant, and this engaged him, in some function or other, with “nearly every category of art and antiquity known, the collectors of those objects, and the markets where they trade, both real and fraudulent.” A glimpse at those times? Hard, sleeves-rolled-up appraisals, meetings with collectors, and black-tie auctions in the evenings. There were celebrities in need of advice; Joanne Woodward, on a French armoire, and Barbra Streisand, on a secretary bookcase. There were months of inventory and cataloguing leading up to the sale of the contents of the Newport mansion of notorious socialite Claus von Bulow, and a trip to Los Angeles with Oprah to find furnishings for her place in Chicago. He appeared on her show twice. On the second, he auctioned off a Michael Jordan game jersey to an audience of millions.

Now, he’s found his way back into the studio. He describes the break as immensly valuable; an opportunity to sharpen and refine. Even if the break was a bit longer than anticipated, he adds. He works quickly and on as many as a dozen things at once, a practice he picked up from his former mentor, Eduardo Chillida.  Chillida suggested one day that he begin several pieces at once, putting each one aside when it had just begun to find form and definition. Then, with a roomful of works in varying stages of progress, Chillida encouraged him to move freely among them, from image to image, without a set pattern or plan. The practice suited him; he found it helped keep his eyes fresh and, most important, it forestalled over-analysis.

Read suggests that painting and sculpture are, far more than anything one learns or practices, an attitude. Artists can create narratives, they can create images, or they can create experiences. Picasso and Miro were the first, master storytellers; Rothko and Tapies created compelling images, and color field painters and others, like Diebenkorn, created complex visual experiences.  I find myself pursuing something between the last two. I hope to create evocative images accompanied by experiences of color and form.

Why is ‘attitude’ so important? To create something worthwhile, an artist must be keenly aware of where he or she is going, and be equally aware that to get there, they must balance a series of stark contradictions. This artist must juxtapose and overlay colors, forms, and lines with strict discipline, and complete surprise. The artists is, at the same time, practitioner and observer, directing work that is to be done with both care and analysis as well as blindness and emotion. Finally, the artist finds a way to  pair complete abandon with refined taste. Picasso said taste is the enemy of creativity. Well, all great artists find a way. 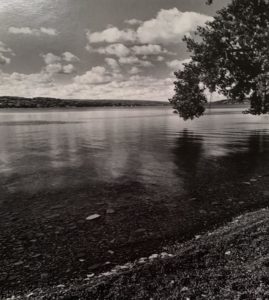