Caleb Weintraub’s exhibition at Redux analyzed the ideas of over-stimulation and desensitization – the disintegration of moral and spiritual awareness and the absence of accountability in our culture. He conjured a world of excesses and extremes. A world not dissimilar from our own, where the inhabitants could no longer distinguish between good and evil, love and hate, hunger and greed. Here children reigned supreme; they turned against parents, assumed adult roles, and functioned outside the normal realm of behavior and experience. The works addressed a culture that had lost its ability to be scandalized. Events that might otherwise have seemed obscene or horrifying were delivered in candy colors with vibrating patterns and spattered saccharin  blood the color of pink bubble gum, unsettling us by virtue of  their humor and their farce and challenged us to consider the consequences of indulgence.

Caleb Weintraub was born in 1977 in Trenton, New Jersey and grew up in the suburbs of New York. After finishing high school, he went to Israel to study religion. Upon returning to the US he went to Boston University to complete his BFA. Following college, he spent a year performing and recording with the band Stick Figures. He went on to earn his Masters of Fine Arts degree from The University of Pennsylvania in 2003.  After graduation, Weintraub taught at the University of Pennsylvania for two semesters. At the same time, he was hired by the city of Philadelphia to paint a fifty foot outdoor mural.  Shortly after he moved to Brooklyn NY, where he continued work in the studio and took a job teaching drawing at Kean University in New Jersey. He currently is a visiting professor of painting, drawing, and design at Indiana University where he lives with his wife and newborn son.

Weintraub is the recipient of numerous painting awards including the Lawrence Shprintz Award and the Piero Dorazio Award.  His paintings, videos and printed media have been widely exhibited.  In December 2004, a solo exhibition of his work entitled “See How they Run” at Galerie Swanstrom in Boston was met with great critical success and public intrigue.  He exhibited in March 2005 at Axel Raben Gallery in Chelsea NY. His residencies include stays at The Contemporary Artists Center in North Adams, MA and The Santa Fe Art Institute. 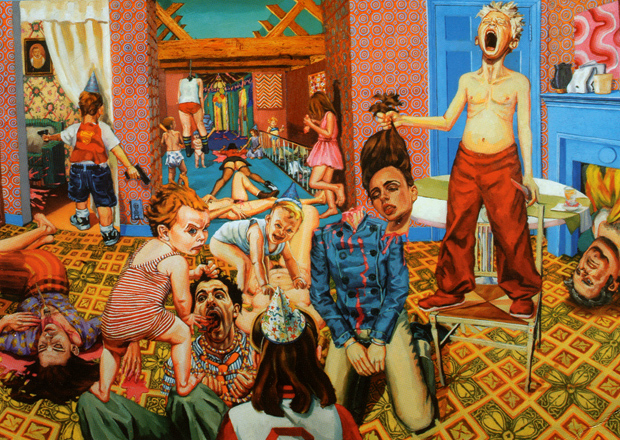