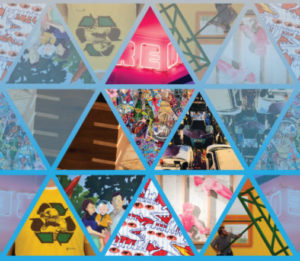 As Redux Contemporary Art Center works on its next chapter, for the last exhibition in its home of 14 years, some of the founding artists along with others who were pivotal to the development of the organization will work together to organize a collaborative group exhibition embracing the ever evolving platform that is Redux. Participating artists include:

This core of artists will develop a project for which anyone from the Redux extended community who has or continues to shape the organization can participate and add to the exhibition. The gallery will be open for extended hours for anyone to drop in and partake: Saturday March 11-Monday March 13, 10am-10pm. Materials will be provided.

On Tuesday, March 14, 5-6pm, the eight artists organizing the project will take part in a panel discussion at the College of Charleston. The group, all of whom are alumni of the college, will talk about their formative experiences at Redux and the path their varied careers have taken since their experience with the organization.

For the opening reception at Redux on Tuesday, March 14, 7-9pm, the final work will be unveiled and musicians Bill Carson, Nic Jenkins, Ron Wiltrout, and Sam Sfirri, all who have performed in the former piano factory at various points since 2002. Rebel Taqueria food truck will be on site, and beverages will be flowing.

Bob Snead, a native of Charleston, SC, graduated Cum Laude in 2002 from the College of Charleston with a BA in Studio Art. Snead co-founded Redux and remained founding director until 2005 when he left to pursue graduate studies at Yale University School of Art. After receiving his MFA in painting and printmaking in 2007, Snead helped form the traveling artist collective Transit Antenna and spent the next two years developing community based art projects across North America. Since then, Snead has continued a rigorous studio practice in New Orleans. In 2011, he was named a distinguished alumnus of the College of Charleston for his extensive work with non-profit arts organizations, and he is currently Executive Director of Press Street / Antenna Gallery, a board member of Common Field, and was the director for the 2013 Hand-in-Glove Conference in New Orleans.

Snead’s paintings, prints, drawings, installations, and performances utilize domestic refuse, both physical and emotional, to investigate the intersections and qualities of relationships between himself and the people or items that surround him. Snead utilizes craft and humor to create an immediate entry point for the viewer into a world that often has a bleak mental interior. Failures (from the tiny to the monumental in both process and life) are embraced, and the spaces, times, and patterns that haphazardly form in domestic life are filtered through material techniques to develop some semblance of harmony.